For some strange reason back in December I created this event….Camping or rather Glamping!  A few of us did a little research and settled for Hollands Wood in Brockenhurst.  I had this romantic idea of camping in the forest, tents higgledy piggledy, here there and everywhere, not pitched uniform fashion.  I have my childhood memories of camping with my sister and parents every bank holiday weekend at a different site down there, our border collie ‘Lady’ also part of the family, and a couple of times here 4 pups came to.  My dad built a chicken wire run for them, my what a stir this caused, as you can imagine.

We checked the forecast daily from the beginning of May, it changed daily, but you can bet when the forcast was sun, cloud and rain this was the correct outcome.

On the morning of Bank Holiday Monday, 4 mums, plus 2 kids each set off, we arrived at our chosen site, Hollands Wood by 10.30am, when I asked about putting up our gazebo I was told we were not allowed at busy time!  “Anyway” the man at reception said “its not a gazebo its your events tent”  bugger he heard me….” er er No No, its our kitchen” lol! He promised if the weather turned we could put it up the next day, which we did.

We found our pitches, first things out of the cars, table and box of wine, followed by tents, ” I must see this” came a comment from a fellow ‘male’ camper.  Phah! 4 tents, 2 hours lots of time for wine then.  Ellie brought her chimnary, we don’t do things by half, BBQ lit, more wine consumed, we may not have had electricity but we had wine and each other, priceless!

Then the rain came! Next morning we went our seperate ways in the rain for the day, on our return I noticed some of the food in the gazebo was on the floor, unzipping and further inspection found foot prints and a nice puddle of something yellow on the table, we had been burgled by squirrels.  We needed a drink to get over the shock.

Highly recommend this place, the food was lovely and very reasonable, they tolerated our kids and us the drunken mums along with our foot attire! 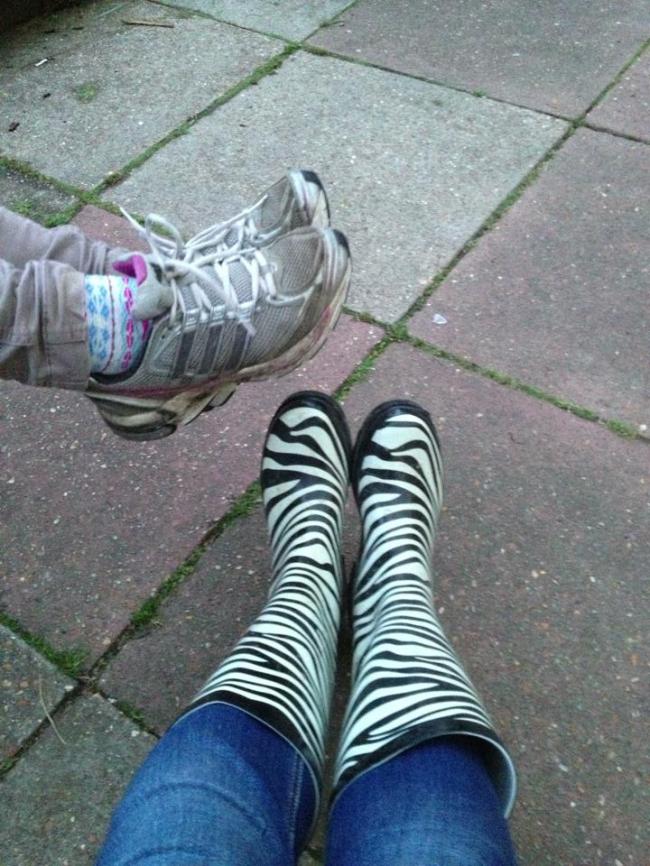 Another lesson to be learned is that its not just thieving squirrels to be wary of, the ponies are damned right blatant with their thieving technique, when 3 out of the 4 of us were elsewhere, 4 of the furry four legged robbers descended on our camp, poor Sarah tried her best to protect our banquet, but alas the bananas in Kelly’s tent could not be saved!

These are the cuties that burgled our bananas!

When it was time to pack up, it was raining, those tents were down in no time, cars packed up and away we were. I think my fondest memory was my son saying to me “Mum are you still drunk?”  “Don’t be silly son its only 8.30am, maybe in a couple of hours”

The few days I spent with my friends and our kids was a definite bonding experience, we as women have formed a lasting friendship, the older girls most definitely have.  Without sounding harsh those of us still married within the group, firmly believed we had a better time without our men, not because we don’t like them, but because we just did, I can’t explain it, try it for yourself.  We now have tent envy, Ellie has already upgraded her tent.

I would also recommend Hollands Wood, the site itself was the children’s playground, the mixture of weather didn’t spoil their fun, the ponies, cows and squirrels were what we came for, oh yes and the wine!

Don’t take my word for it, go visit